Strongly correlated systems show a number of exotic phenomena, like superconductivity and magnetism, which cannot be understood without including many body interactions. Subtle balance of different factors: on-site correlation (U), exchange interaction (J), spin-charge or electron-phonon interaction, can result in complex phase diagrams with different low temperature (ground) states dependent on pressure or doping.

The competition of different types of insulating and magnetic  states with superconductivity is studied in organic conductors for decades. The discovery of the quantum spin liquid ground state is more recent, but even more intriguing. It appears in materials with a strong magnetic frustration, where, despite strong antiferromagnetic coupling, quantum fluctuations prevent any spin ordering. Quasi-two-dimensional charge-transfer salts kappa-(BEDT-TTF)2X are molecular solids which can be superconductors, antiferromagnets, spin-liquids and even multiferroïcs. They are composed of layers of triangular constellation of dimers of BEDT-TTF (bis-(ethylene-thio)-tetra-thia-fulvalene) molecules, separated by anion layers (X) parallel to the (b,c) plane. There is a charge transfer of about one electron per dimer, from the BEDT-TTF molecular layer (donor) to the anion layer (acceptor). Thus the sites of the triangular lattice of dimers are accommodated by approximately one hole carrying a spin-1/2. 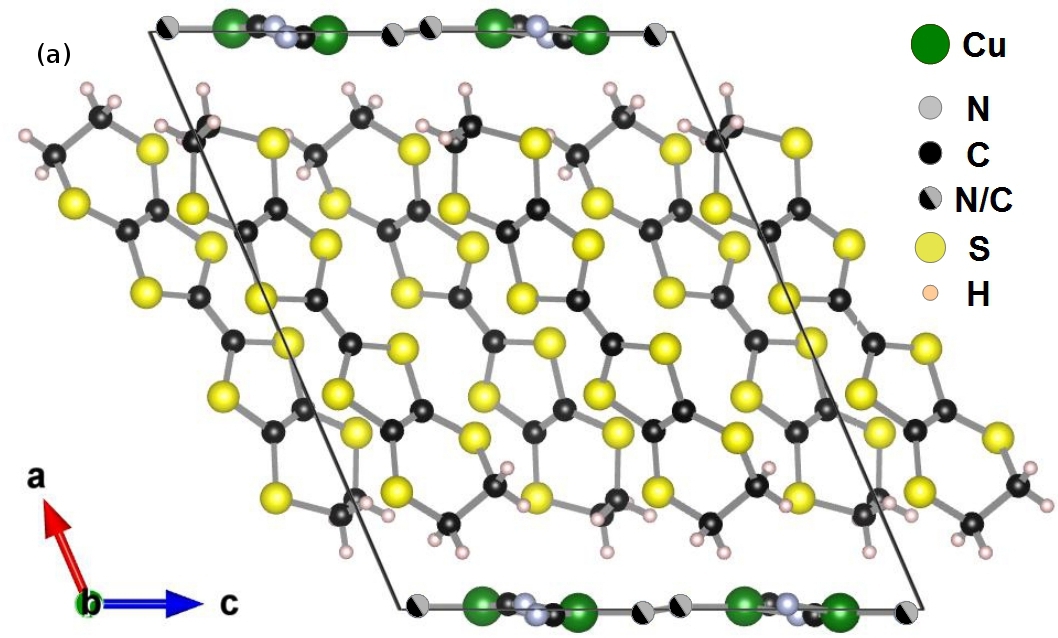 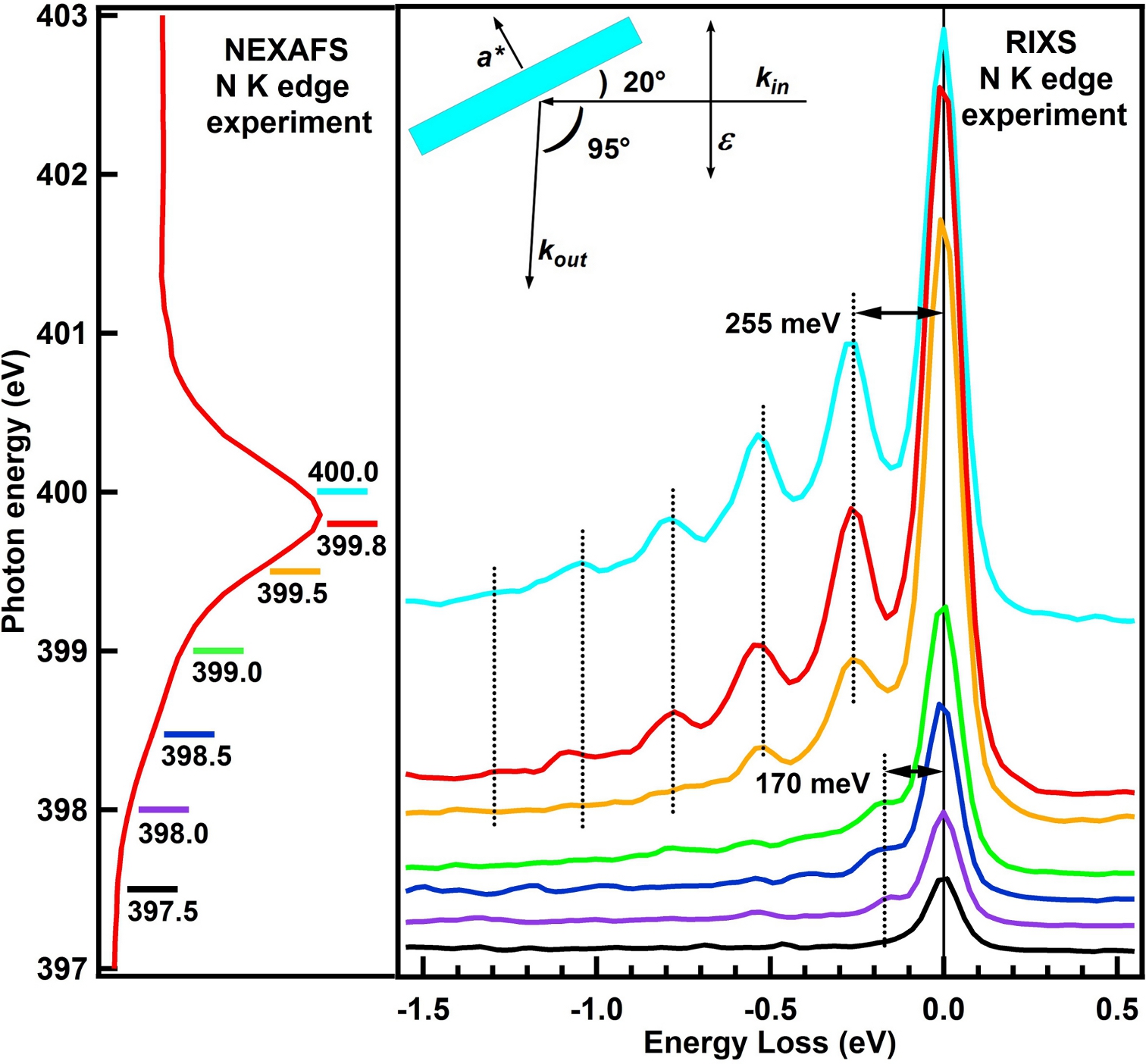 N K edge Resonant Inelastic X-ray Scattering (RIXS) experiment, performed at the SEXTANTS beamline, synchrotron SOLEIL, shows excitation of five harmonics of the CN stretching mode in kappa-(BEDT-TTF)2Cu2(CN)3. Such clear observation of a number of harmonics by RIXS is very rare for a solid, even if it is quite often for gas state molecules. Moreover, combined with accurate calculations of the core-excite states, it reveals the importance of the electron-phonon coupling related to the anion-plane phonon modes. This brings to the light the strong coupling of the charge and lattice degrees of freedom which can explain different peculiarities of the system, namely its spin-liquid and its ferroelectric behavior (https://doi.org/10.1103/PhysRevB.96.184303).

BaVS3 should have quasi-one-dimensional properties according to its structure. It is peculiar that at room temperature (RT), only half of its electrons are delocalized along the vanadium-sulfur (V-S) chains, while the other half is already localized and underpins the Curie-Weiss paramagnetic behavior. Charge degrees of freedom freeze via formation of charge density waves (CDW) below 70 K, while spins order only below 30 K in an antiferromagnetic (AF) structure. 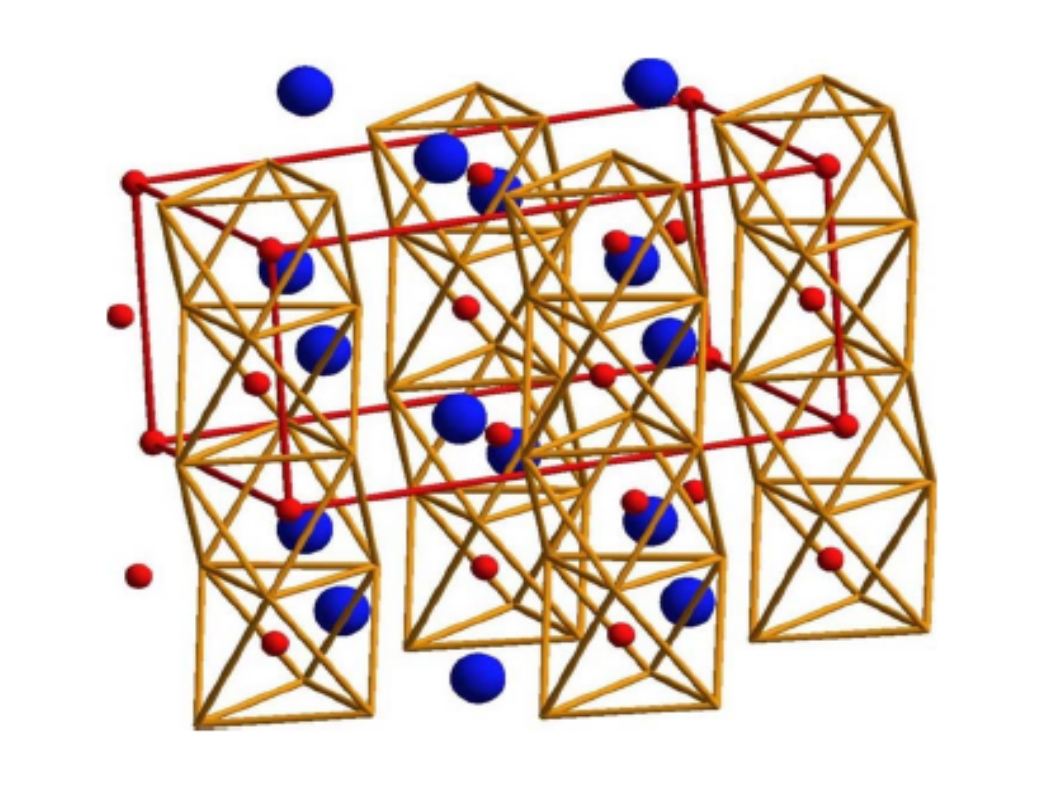 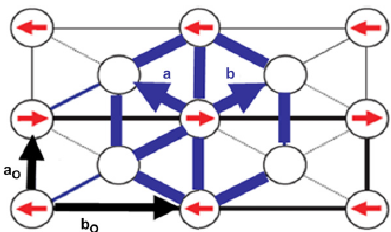 With the help of single crystal V L3 edge resonant diffraction measurements, performed at the UE46-PGM1 beamline, BESSY II, we determined precisely the low temperature (ground) state anri-ferromagnetic order as being incommensurate in three directions, with spins lying in the plane perpendicular to the V-S chains (https://doi.org/10.1103/PhysRevLett.106.167203 and   https://doi.org/10.1016/j.physb.2012.01.008). 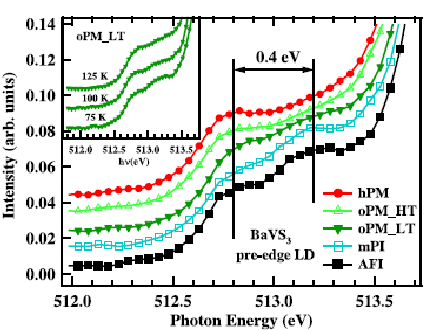 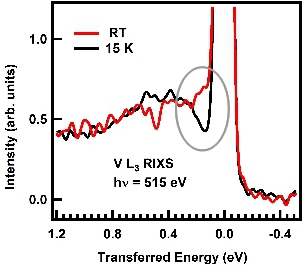 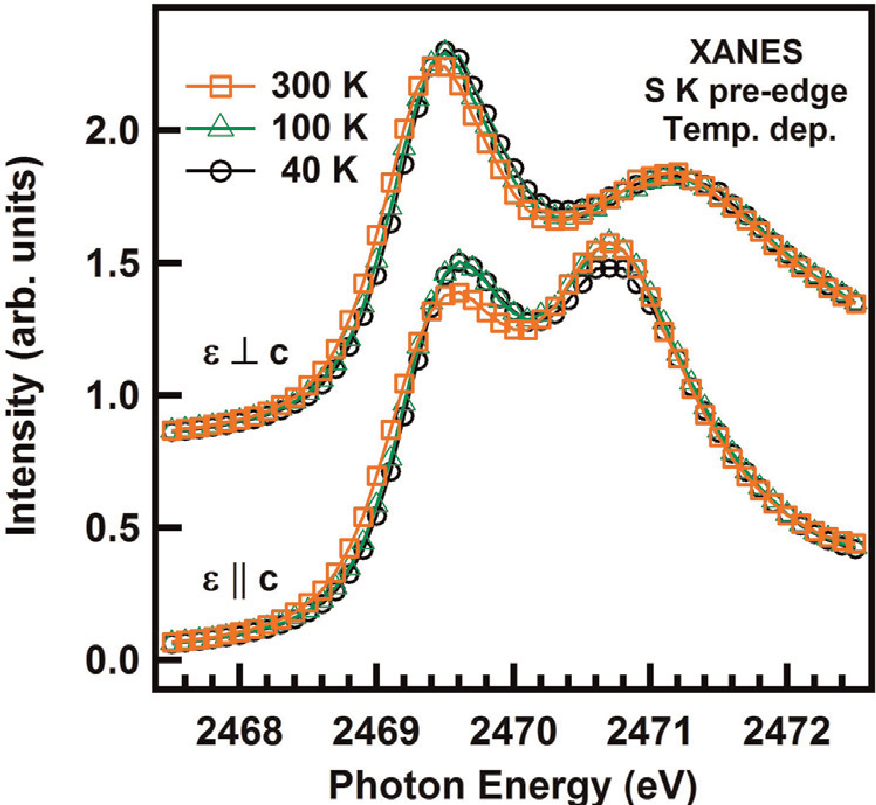 NEXAFS, measured at the LUCIA beamline, SOLEIL. They point to the importance of the vanadium-sulfur hybridization, as the sulfur constitutes the octahedral cage of the vanadium atom (https://doi.org/10.1016/j.physb.2014.11.067).

(La,Y)y(Sr,Ca)14-yCu24O41 structure consists of an alternation of CuO2 chain and Cu2O3 ladder planes, separated by Sr,Cu,La,Y atoms. One of their members, Sr14-xCaxCu24O41, with x  11, is the first cuprate superconductor with a non-square lattice. The interplay of spin and charge degrees of freedom is of major importance in cuprate superconductors where the best candidate for the Cooper pair formation mechanism seems to be the spin-fluctuation-glue.

Collective spin excitations in the parent Sr14Cu24O41 compound by Cu L3 edge RIXS (https://doi.org/10.1103/PhysRevLett.103.047401) are studied at the ADRESS beamline, SLS. The bi-magnon gap is evaluated to be of the order of 100 meV. Moreover, the amount of mobile charges (holes) is determined by LDA+U calculations of the O K edge polarization dependent NEXAFS spectra (https://doi.org/10.1103/PhysRevB.85.075108). The correlation has here an effect of depleting the ladders and thus decreasing the number of mobile charges, but the amount of holes in superconducting compound is similar to that of high Tc superconductors. 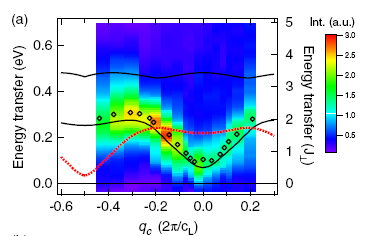 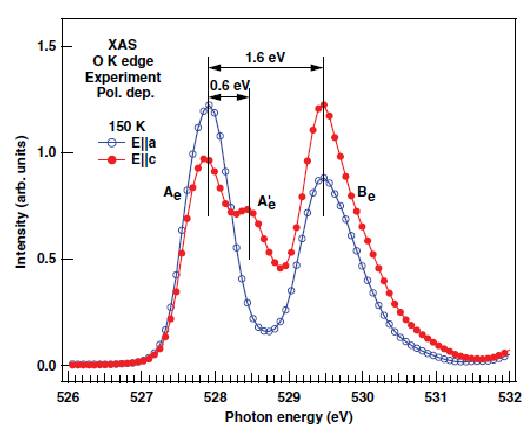