The electronic structure of an atom or a molecule is described as shells where the electrons stand. They may be sorted in three classes: outer-valence, inner-valence and inner (also called core) shell electrons, which have increasing binding energy. If the system interacts with ionizing particles (photons, electrons, ions,...), electron of different shells can be ejected. Outer-valence ionization leads to stable systems. Core ionized atoms (or molecules) have, in general, two possibilities to decay to a stable state: by emitting a photon (radiative decay) or by ejecting an electron (Auger decay). One should mention, however, that in the case of molecules, vibrational relaxation is also conceivable. The inner-valence ionized systems, on the other hand, usually cannot decay non-radiatively, i.e. by emitting a secondary electron, since the energy of the inner-valence vacancy state lies below the double ionization threshold and thus the process is energetically forbidden. If the inner-valence ionized system is isolated it relaxes either by photon emission or in the case of molecules also by coupling to the nuclear motion. When embedded in a chemical environment, like in a cluster for example, another decay pathway so-called Interatomic and Intermolecular Coulombic Decay (ICD) is possible: the excess energy of the excited system is transferred to a neighboring atom/molecule inducing its ionization. 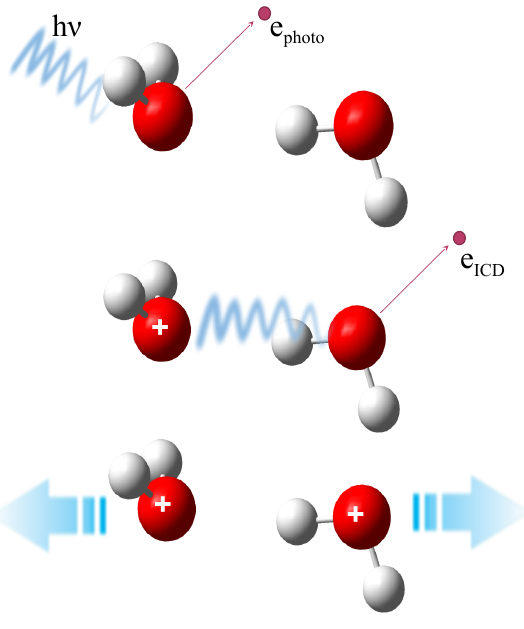 The ICD process was predicted in the late 90's by Cederbaum et al. It was experimentally demonstrated 6-7 years later on the example of neon clusters by Marburger et al. and Jahnke et al. Since then, it was shown that ICD is a general process, taking place in a large variety of systems, like hydrogen bonded  or van der Waals clusters. It has been observed mainly after photoionization or photoexcitation but has also been experimentally demonstrated after electron  and ion impact. ICD was first predicted and observed after ionization in the inner-valence shell, but it was also demonstrated after (i) two-electron processes like simultaneous ionization-excitation and double ionization or excitation (ii) Auger and resonant Auger cascades. see ICD bibliography.

Photoelectron spectroscopy is a powerful tool to study the electronic structure of occupied core and valence levels of isolated species. Furthermore, with the recent advances in ultrashort and bright XUV and X-ray sources, femtosecond time-resolved photoelectron spectroscopy is now possible, which allows to follow the dynamics of a chemical reaction on the relevant timescale.

I have investigated photoelectron spectroscopy in several contexts:

- as an external probe in a pump-probe set up. For example,  we have demonstrated that photoelectron spectra (in the valence and core-shell) can be used to follow the the tautomerism dynamics of acetylacetone.

- as an analytical tool for investigating the structure of molecules and molecular clusters.

- as a probe of the electronic and nuclear dynamics induced by intense laser pulses. 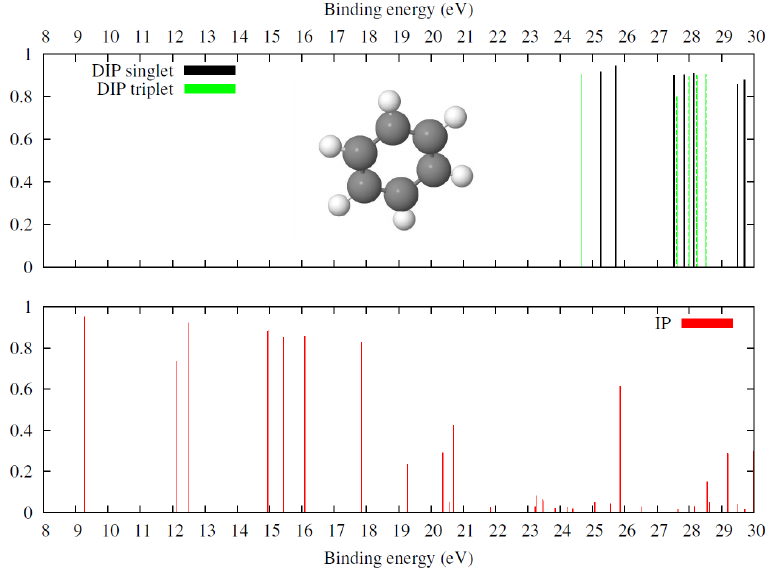 The theoretical study of electronic processes in ion-atom and ion-molecule collisions was the subject of my PhD thesis. Since 2005, I have investigated the electronic excitation, capture and ionization in various collisions systems in the keV energy range for which these three fundamental processes must be treated altogether in a non-perturbative approach. In particular, I was (and still am) interested in the description of the ionization and of multielectronic processes which both remain challenges for theoreticians.

Ion atom and ion-molecule collisions are elementary steps in many applications and the cross-sections for the occuring electronic processes are needed but very often not known, or at least not accurately. In particular, I am interested in three applications:

- the first one deals with hadrontherapy in which ion beams are used for tumor treatment. Little is known in keV ion-molecule collisions relevant for hadrontherapy. This is an important issue since most of the energy is deposited when the ions reaches this energy range. Knowledge of the corresponding cross-sections would improve the modelling of ion-biological matter interactions.

- the second application lies in astrophysics: the solar wind is a hot plasma, composed of charged particles, electrons and ions (around 92% of protons, 8% of helium ions and 0.1% of heavier elements) that may collide with atoms and molecules (H, O, OH, CO, CH4, NH3, H2O,...) from solar-system bodies (planets and comets). X-ray emission induced by these collisions can be detected and used to determine the structure and dynamics of the solar wind plasma. In particular, heavy ions from the solar wind (mostly multi-charged oxygen) can capture electrons from the molecules into highly-excited electronic states which then deexcite radiatively emitting the X-ray photons. This scenario, called Solar Wind Charge-Exchange (SWCX) mechanism seems to be the most probable process for the X-ray emission of comets. Elaborate models have been developed to simulate the X-ray emission due to the SWCX mechanism.  In practice, X-ray emission energies and intensities from highly-excited multi-charged ions and charge-exchange cross-sections in the keV are needed as input data of these models. However, there is a lack of accurate atomic and molecular data of the latters and that impedes the modelling of astrophysical plasma.

- the third application concerns the modelling and diagnosis of laboratory fusion plasma. Neutral beams (typically hydrogen atoms) are injected in plasma sources in order to probe the latter through charge exchange recombination and beam emission spectroscopies. Cross sections for electron capture, excitation and ionization processes occuring in the course of collisions between highly-charged ions (impurities in the plasma) and hydrogen atoms in the keV energy range are required as input data for these spectroscopies. 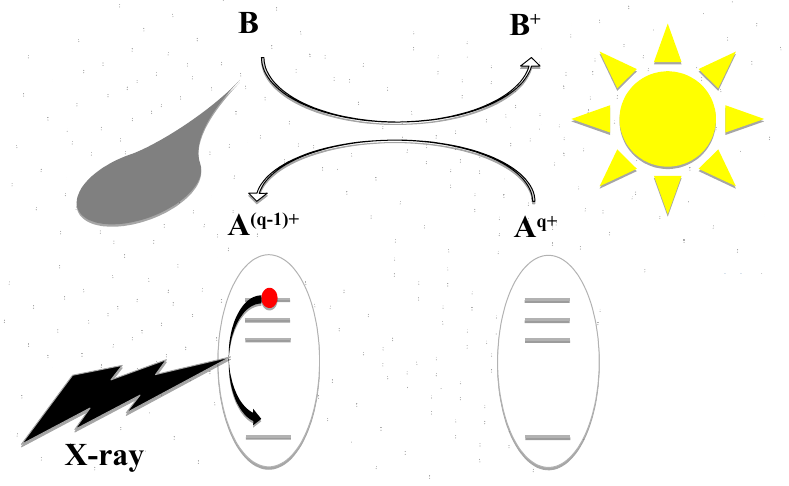