A few selected examples of our present results

Many leading new results that have been obtained by our group, here is a list of the most important ones:

* Filtering Auger decay of a given hole in the atom: example of Kr 3d and Hg 4f decay.

As a first example, we show below the ability of the magnetic bottle coincidence experiment to filter with a moderate resolution the Auger spectra associated to the decay of a given Atomic core hole: 3d3/2 and 3d5/2 in Kr; 4f5/2 (a) and 4f7/2 in Hg. 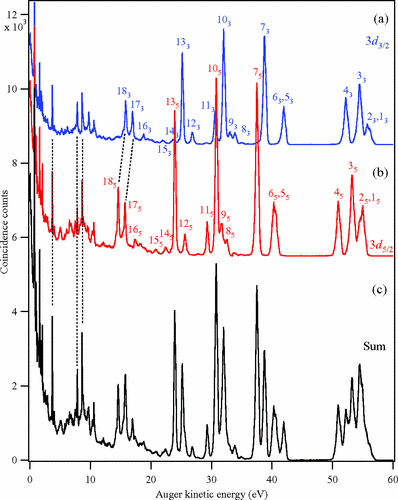 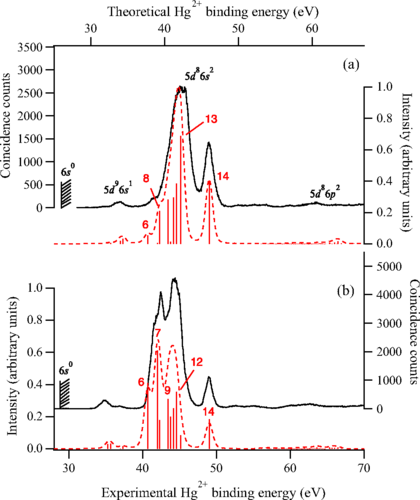 * Filtering Auger decay of a given hole in a molecule: example of HBr Br 3d decay

In a similar way the Auger photoelectron coincidence method allows us to filter the different molecular Auger components. The example of the 3d-1 Auger lines in HBr is the figure bellow. Here the complexity is larger than in the isoelectronic Kr atom, as the molecular field splits the 3d hole into five components. 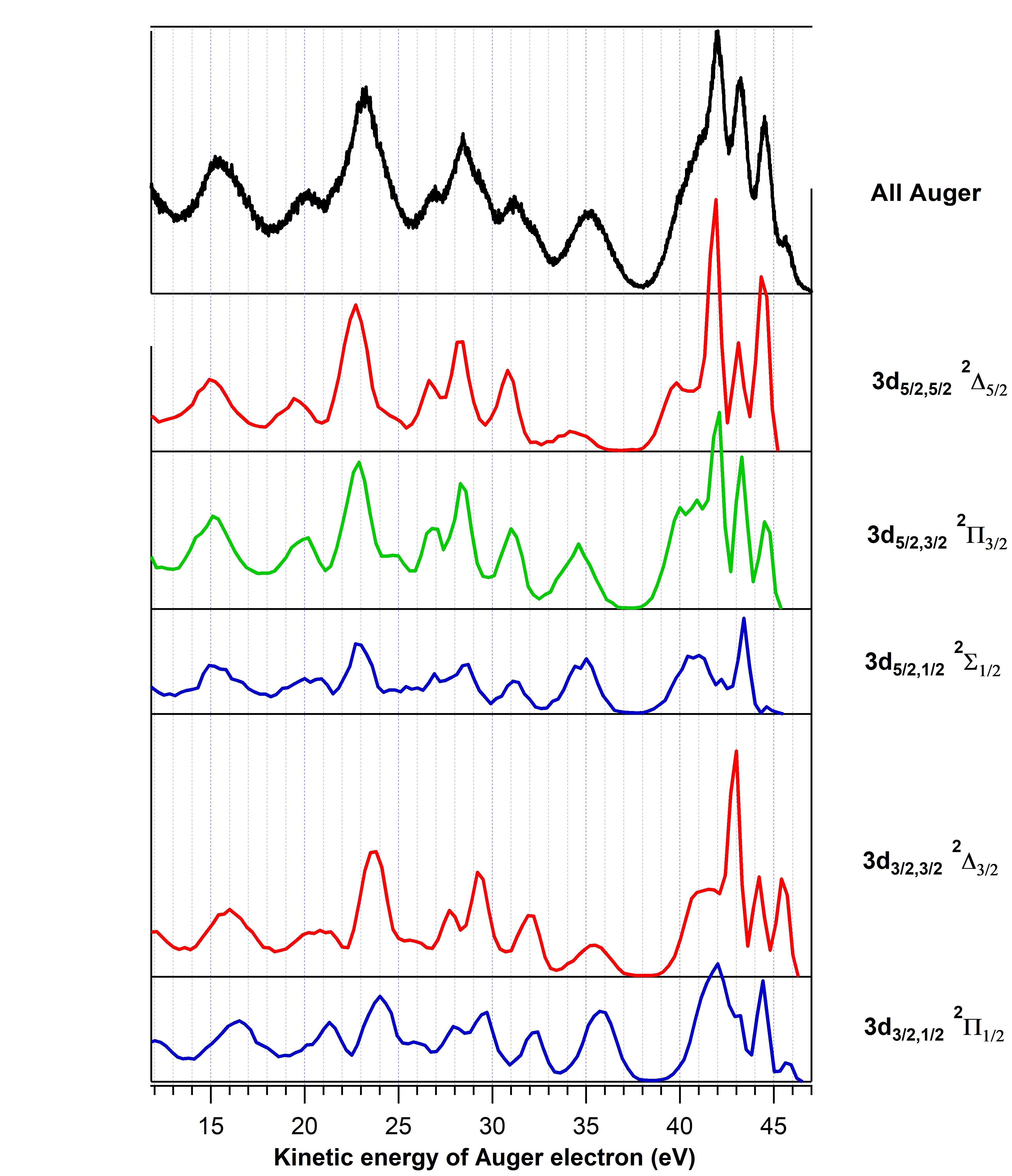 Comparison of the HBr total Auger spectrum (top) and of the five componants that it includes, due to the decay of the different 3d-1 molecular states [19].

* Filtering Auger decay of a double core hole in a molecule: example of K-2 decay in C2H2.

The power of the coincidence technique is that it can point out a weak process and study it in detail. The Auger decays after core double ionization in C2H2 is presented in the figure bellow. The two 1s core holes decay each by emission of an Auger electron. Coincidence detection of the 4 involved electrons (the two photoelectrons and the two Auger electrons) allow us to extract the complete Auger spectrum associated to the decay of this double core hole, and also the energy correlations between the two Auger electrons.

* Retrieving the Auger decay of a core hole in an ion. Example of 2p decay in Ar+ ion.

As Auger spectroscopy allows one to characterize a sample, it is very interesting to get Auger spectra resulting from the core ionization of an ion. Such information is important for instance in plasma physics. Direct experiments on ions are however extremely difficult. An alternative is to start from the neutral species and create a core - valence double ionization. [16] This will create the same intermediate states as if we had ionized the ion, and the coincidence between the two photoelectrons and the Auger electron will give access to the Auger spectra of the ion. The figure bellow illustrates this on the Ar+ example. 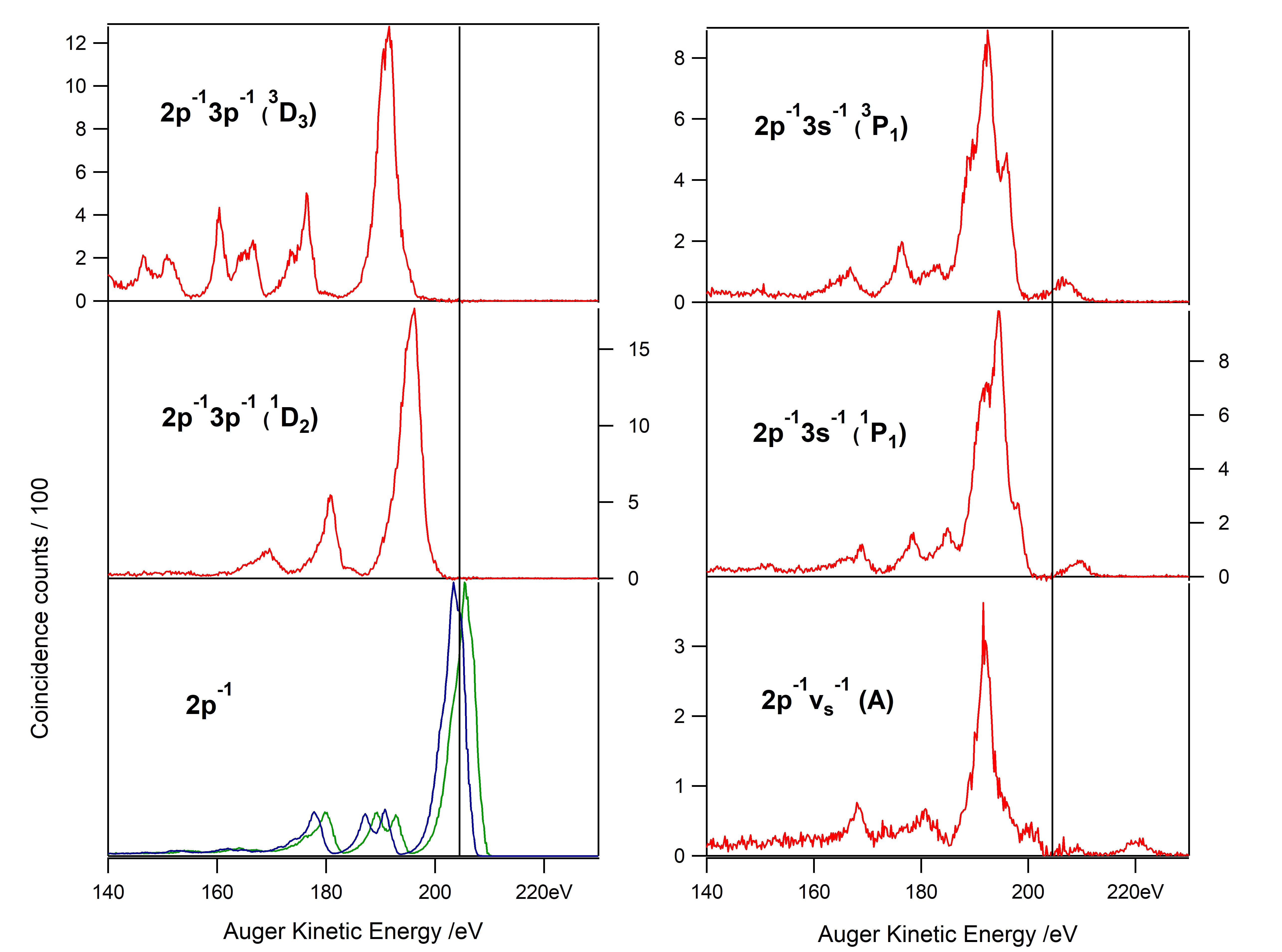 An example of the sensitivity and power of our HERMES experiment is given here in our study of the mechanisms for the triple Auger decay of 2p and 2s holes in Argon [[Lablanquie et al, J. El. Spectr. Rel. Phenom. (2017) online]. An inner-shell hole decays dominantly by emission of a single Auger electron. However a very weak path may exist where 3 Auger electrons are emitted; the probability is of only 0.18% for the 2p hole and of 8 % for a 2s one. Yet, energy correlations between the three emitted electrons can be probed in detail, as shown in Fig. 2. Energy correlations for the population of Ar4+ 3s23p2 final states are markedly different for the decay of the 2p hole (left) and for the 2s hole (right). The two-dimensional Dalitz plots are rather uniformly filled in the first case, but present intense structures along diagonal lines in the second case. The red curves on the right hand-side of the plots show the energy distribution for one of the three emitted Auger electrons. They show that the triple Auger decay proceeds mainly by a correlated, simultaneous emission of the three Auger electrons for the 2p hole, but in a sequential way for the 2s one. 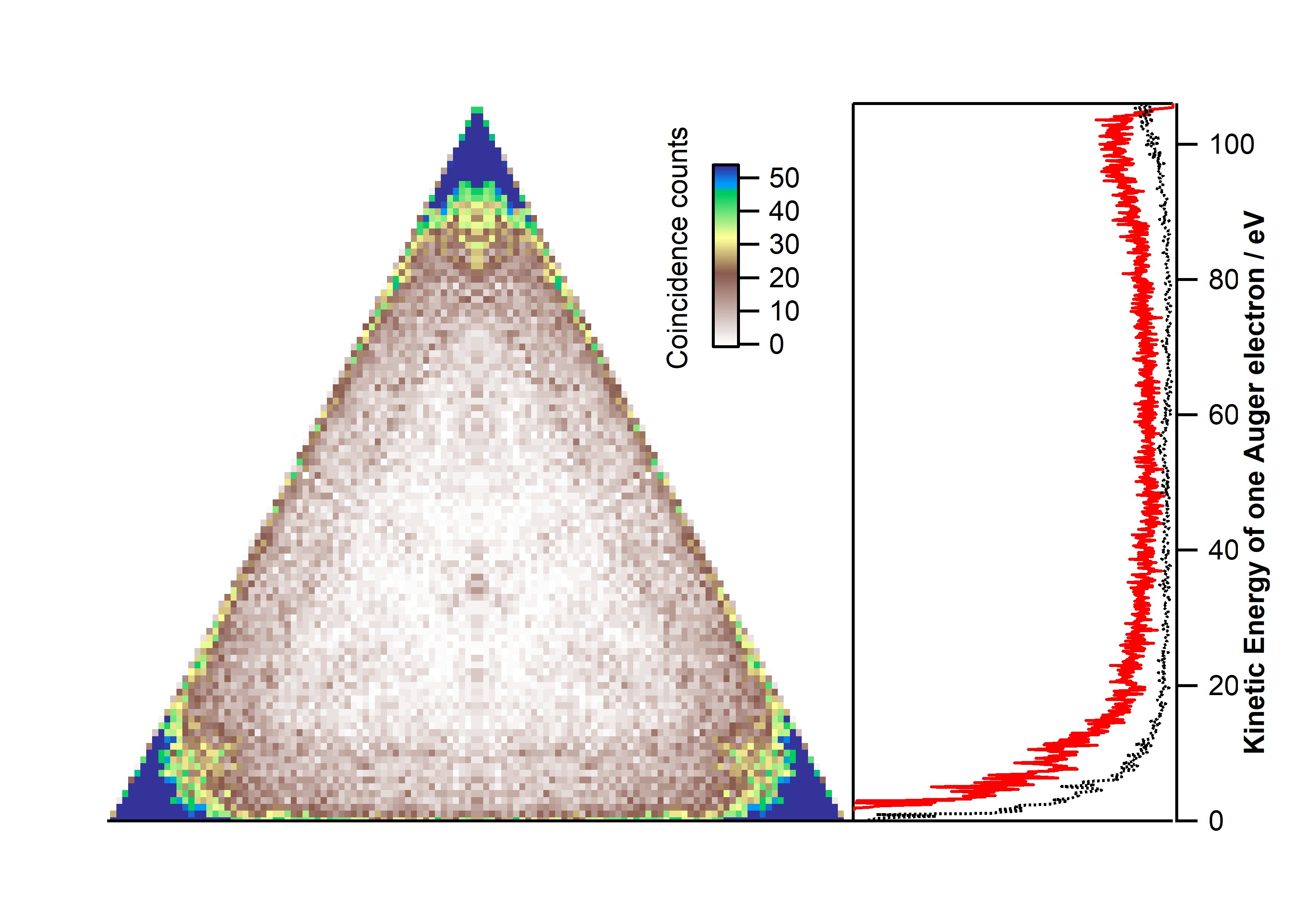 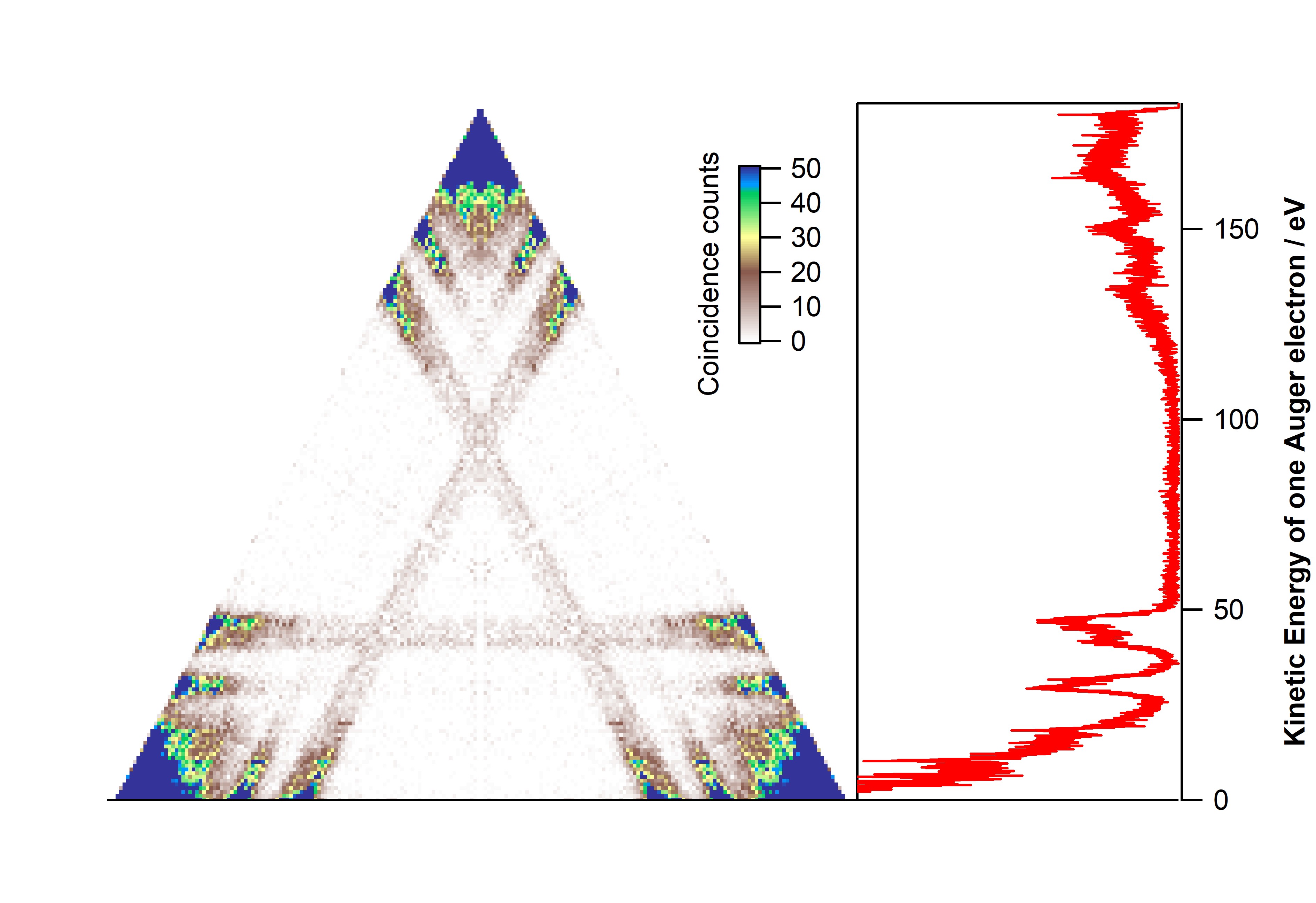 We implemented a high temperature oven in June 2013 in order to investigate Alkali atoms. K, Rb and Na have been studied. Interest lies in the open shell character of these atoms and on the peculiar electron correlation properties brought by the presence of the outer labile ns electron. The Auger decay of the 3s valence hole in K [Palaudoux et al, Phys. Rev. A 92, 012510 (2015)] and of the 3d holes in Rb [Keskinen et al, Phys. Rev. A   95, 043402 (2017)] have been observed. We are now working on the multiple Auger decays of 2p holes in K, and on the triple ionization processes in K [in progress]. This last point is a first step before investigation of the weaker but more fundamental triple ionization process in the Li atom.

One of our major achievements is the study of Double core holes. The interest of molecular DCHs was predicted in 1986 by Cederbaum et al who showed that their spectroscopy can be more informative than that of single core holes, especially when the holes are located at different sites in the molecule [Cederbaum et al 1986 J. Chem. Phys. 85 6513]. We began their studies in 2009 / 2010, just at the time when XFELs (X-ray Free Electron Lasers) became available and opened the possibility to form them in two-photon processes. It turns out that our method is more sensitive and informative; it is based on their formation in a single photon absorption and is due to electron correlation. We published a review paper in 2016 [Lablanquie et al, J. Phys. B, 49, 182002, (2016)] which summarizes our discoveries. Briefly, we first observed single site core double ionization (K-2) in 2010, then in 2011 we detected two-site core double ionization (K-1K-1) in C2H2 molecules. The next step was an extensive study of the C2H2n series of molecules [Nakano et al, Phys. Rev. Lett. 110, 163001 (2013)], to probe the original predictions of Cederbaum. We have measured, for a series of molecules, the weak double cross section probabilities, the spectroscopy of the double core hole states and their decay mechanisms. Collaboration with a Japanese theoretician, M Tashiro unveiled the dynamics of the cascade Auger decay [Tashiro et al, J. Chem. Phys. 137, 224306 (2012)].

The more recent development is the study of so-called K-2V process where a single photon simultaneously ejects a core electron and excites the other electron from the same K core orbital to a vacant valence V orbital. Theoretical modeling by S. Carniato and P. Selles revealed that the spectroscopy of these states is extremely rich, due to the presence with similar intensities, of two paths: the direct one in which a core electron is shaken up to a V orbital during the photoionization of a core electron, and the conjugate one where a K electron is photoexcited to a V orbital (in similarity with a NEXAFS path) while a second electron is shaken off into continuum. After a demonstration of these peculiar properties [Nakano et al, Phys. Rev. Lett. 111, 123001, (2013)], we described in details our theoretical model [Carniato et al, J. Chem. Phys. 142, 014307 (2015)] and experimental method [Carniato et al, J. Chem. Phys. 142, 014308 (2015)]. Non coincidence HAXPES (Hard X-ray Photo Electron Spectroscopy) experiments can also observe this K-2V process in favorable cases, by detecting the specific K-2V photoelectron. Comparison with HAXPES experiments helped us to probe the photon energy dependence of direct and conjugate paths in CO2 [Carniato et al, Phys.Rev.A, 94, 013416 (2016)]. While HAXPES potential larger resolution gave access to the lifetime of the Ne K-2 double core hole, which was found to be 2.9 times smaller than that of a single Ne K-1 core hole [Goldsztejn et al, Phys. Rev. Lett. 117, 133001 (2016)].

Figure 1 shows our first study of the K-2V process, as observed in the series of C2H2n molecules [Nakano et al, Phys. Rev. Lett. 111, 123001, (2013)], and demonstrates its rich spectroscopic potentiality. Here one K-shell electron is excited to a V orbital while the other K-shell electron from the same atom is ionized. Left panel shows the experimental results for the spectroscopy of the states which are formed, and assigned thanks to calculations (right panel). The first resonance corresponds to an excitation to a vacant π orbital, evidently absent in C2H6, and is the analogue of the well-known NEXAFS path in K-shell excitation; it corresponds here to the conjugate path where the photon dipolar transition excites one K-shell electron (green dotted contribution in right panel). The other contribution (bold red line) is of similar intensity and is associated with the direct path where the photon ionizes one K-shell electron.